Positioning Reference Signal (PRS) is taken into consideration in one of the LTE release 9 features to determine the location of User Equipment (UE) based on radio access network information. Now you might be thinking that what is the necessity of PRS,  if we have a GPS technology already built in smartphones and in other cellular equipment. Just think of it  J (GPS may not be accurate always and GPS services may not be available all around the geographical areas , also the accuracy of functioning GPS depends on money you have paid for the services and the quality of GPS device).  The end user application of this PRS feature could be supporting location based services which can be navigation (direction to hotel etc.), emergency call etc.
Process of finding UE location using PRS:
The overall process of finding UE locations are based on three major steps.
Step 1. UE receive PRS from cells (Reference cell and Neighbor cells) 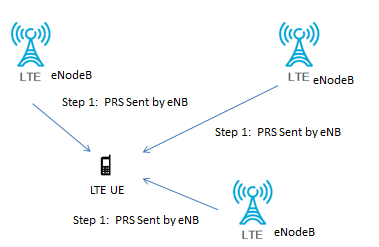 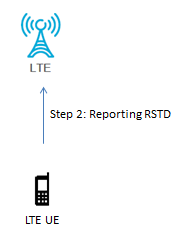 Step 3. Based on UE reported reference signal time difference (RSTD), eNodeB may calculate the longitude and latitude of the UE (which can be based on any specific algorithm, not standardized). 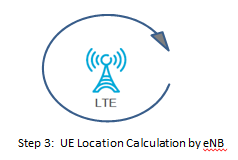 Now take one example to understand the PRS subframe configuration:
Suppose the Nprs is configured by higher layers is 2 and Iprs is configured as 160. Hence from the above table the value of Dprs will be 0. The PRS instances for the first DL subframe of Nprs shall satisfy below formula:
(10*Nf+ ceiling_func_of Ns/2-Dprs) mod Tprs=0 --------Equation 1
Where Nf is system frame number and Ns is slot number.
Hence put the values of Tprs and Dprs in the above equation:
(10*Nf+ ceiling_func_of Ns/2-0) mod 320=0------------Equation 2
Hence for all the values of Nf and Ns which satisfy the Equation 2, will be the first downlink subframe which carry PRS. Hence Equation 2 satisfied for Nf value 32 and Ns (slot) value 0 (that is subframe #0). Hence the first subframe which carries PRS will be subframe 0 of system frame 32 and subframe 1 of system frame 32 (because Nprs is configured as 2 from higher layer for accuracy of consecutive PRS).

Popular posts from this blog

What is Rank Indicaton in LTE

July 12, 2013
Rank Indication is one of the important input to eNB , in selection of the transmission layer in downlink data transmission. Even though the system is configured in transmission mode 3 (or open loop spatial multiplexing) for a particular UE and if the same UE report the Rank Indication value 1 to eNB, eNB will start sending the data in Tx diversity mode to UE . If UE report Rank Indication 2 , eNB will start sending the downlink data in MIMO mode (Transmission Mode 3). Why we need this RI in LTE concept? When UE experience bad SNR and it would be difficult (error prone) to decode transmitted downlink data  it gives early warning to eNB by stating Rank Indication value as 1. When UE experience good SNR it pass this information to eNB by indicating rank value as 2. Because of this reason, you might have observed that some time data transmitted by eNB is in Tx diversity mode, though MIMO was configured and hence you may have observed less downlink throughput than expected one.
17 comments
Read more

Difference between SRS and DMRS

July 10, 2013
There are two types of reference signals used in LTE uplink, to estimate uplink channel quality. Which allow eNB to take smart decisions for resource allocation for uplink transmission, link adaptation and to decode transmitted data from UE . So to take first smart decision by eNB Sounding Reference Signal  (SRS) is being used. SRS is being transmitted by UE on the last symbol of subframe (in which subframe will come to know later). This SRS report the channel quality of over all bandwidth and using this information eNB assign the resource (to UE for uplink transmission )has better channel quality comparing to  other bandwidth  region. So is SRS optional in LTE? Yes. SRS is configurable and infact we do not need SRS at all in case eNB assign all resource block or full bandwidth or have no choice. Now on the basis of configuration and node wise there are two types of SRS (refer 36.211), cell specific (Common SRS) and UE specific (Dedicated SRS).  eNB notify UE about th
20 comments
Read more

What is CQI PMI RI in LTE?

July 11, 2013
Well, we had discussed about uplink channel state information  Difference between SRS and DMRS by reference signals (SRS and DMRS). Now to achieve 1Gbps or more downlink speed in LTE with effective resource utilization of full bandwidth available,   CQI PMI RI and many more parameter play very important role. So what are CQI, PMI and RI in LTE? CQI (Channel Quality Indicator) , reported by UE to eNB. UE indicates modulation scheme and coding scheme to eNB , if used I would be able to demodulate and decode the transmitted downlink   data with maximum block error rate 10%. To predict the downlink channel condition, CQI feedback by the UE is an input. CQI reporting can be based on PMI and RI. Higher the CQI value (from 0 to 15) reported by UE, higher the modulation scheme (from QPSK to 64QAM ) and higher the coding rate will be used by eNB to achieve higher efficiency.  PMI (Precoding Matrix Indicator) , UE indicates to eNB , which precoding matrix should be used
Read more